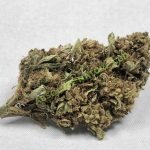 T1 Trump is one of the most flavorful and powerful hemp flower strains on the market today.

General Introduction to T1: AKA: Trump 1

T1 is named after the 45th President of the United States. One thing is for sure; it packs a real punch, highly famed for its couch-lock effects.
This high CBD strain is often described as “medicinal hemp/cannabis” to differentiate it from industrial hemp, primarily bred for seed and fiber. Absolutely no fake news here!

Distinct mottled hues of browns, greens, yellows & orange. Almost indistinguishable from marijuana. She looks at the business and performs as well as she looks. Covered in trichomes, hairy with an abundance of lighter orange pistils. The product photos are of the actual batch on sale; some variations will occur. The second image is the sample sent to the lab. Some super-dense flowers internally, a little open at first glance.

Displaying characteristics from both its parent strains, being heavy on the terpene profile, and real depth, you’ll get fresh hops, spicy cinnamon, with woody pine, and a hint of mint too. Really refreshing, sweet, and pungent as you might expect from such lineage.

T1 Trump is the perfect combination of its parent strains. Carrying floral sweetness from the Wife, Skunky with aromatic characteristics of orange citrus, ripe berry followed by earth and wood & pepperiness. T1 has to be one of the most flavorful and complex strains out there.

Keeping you feeling calm and relaxed, suppressing any negative feelings you might be dealing with, layered with focus, concentration, clarity, sense of well-being. T1 will give you a full-body effect, which can result in couch-lock.  T1 is one hemp strain guaranteed to satisfy almost anyone.

Total THC = THCa * 0.877 + d9-THC. Total CBD = CBDa * 0.877 + CBD
LOQ = Limit of Quantitation; The reported result is based on a sample weight with the applicable moisture content for that sample; Unless otherwise stated all quality control samples performed within specifications established by the Laboratory.

A little on the smaller/medium size, some large and small mixed. Well trimmed and quite dense, a little open in areas.

Add a review Cancel reply
Keeping you feeling calm and relaxed, suppressing any negative feelings you might be dealing with, layered with focus, concentration, clarity, sense of well-being. T1 will give you a full-body effect, which can result in couch-lock. T1 is one hemp strain guaranteed to satisfy almost anyone.

All products on the website are not for use by or sale to persons under the age of 21 years. Do not use CBD products if you are pregnant or nursing. Read all labels carefully and follow the dosage and usage instructions. Seek a doctor’s advice for using any product on the website for a medical condition or as a dietary supplement. All information presented on the website is for informational purposes only and should not be considered as medical advice.

All products are derived from industrial hemp and are Farm Bill Compliant with less than 0.3% THC. Percentage of THC and other cannabinoids in all products on the website is in accordance with the validated scientific methods and testing standards.

None of the statements on the website are evaluated or approved by the Food and Drug Administration. These products are not meant to diagnose, treat, cure or prevent any medical condition.

Take 15% off your order now.
All you have to do is sign up to the Online CBD Store newsletter.

By signing up, you agree to receive marketing emails from Online CBD Store about updates, offers, upcoming events and services at the email provided. Consent is not a condition of any purchase. Message and data rates may apply. You can withdraw this consent at any time by clicking on the “unsubscribe” link in the email. Read our terms & conditions and privacy policy.